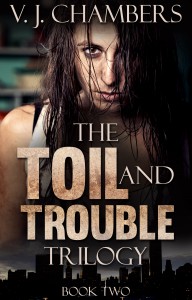 Olivia Calabrese struggles to deal with the fact that her boyfriend Brice turns into a berserkerâ€”rage-filled monsterâ€”every night at midnight, and that if she ever has sex with him, she’ll turn into one too. When she’s not busy looking for a cure (that everyone claims doesn’t exist) for the berserker virus, she’s trying to deal with the threats her mob boss father Lucio levels against her newly formed jettatori “family.”

If that weren’t enough, it’s becoming clear that Tommy, her mentor and friend, is a double-agent for Lucio, feeding information to Lucio so that he can try to kill her with armies of berserkers.

And to make matters even worse, her right-hand man Josh seems to be developing a crush on her, something that Brice is not particularly happy about.

If you haven’t given this trilogy a try yet, you really should. I realize I’m biased and all, but I really feel like it’s one of my best writing efforts. I think the books move really fast, they’re very taut and suspenseful, the relationship stuff is really raw and real, and while there’s still a good bit of, “OMG, am I doing the right thing here?”, the characters are less whiny than Jason and Azazel were.

It did want to be a love triangle, so I let it, but I think I’ve handled love triangles a wee bit more realistically here than a lot of YA authors do. (Not that I’m saying the Toil and Trouble Trilogy is YA. Because I’m not saying that.) So, it’s not all, “Oh I like you both, I can’t decide.” It’s more like, “I didn’t mean to sleep with him” and “I’m going to go rip that ****’s face off.” So…enjoy. 🙂