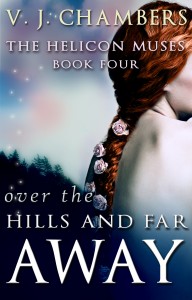 Enjoy this excerpt from Over the Hills and Far Away, The Helicon Muses, Book Four. Don’t forget to pre-order the book!

Sawyer entered the dining room in the food enclave. Rufus Twigg and Lute Thundercloud were sitting at one of the tables, munching on cookies.

Wow, so those two were together all the time now. Sawyer wondered if they were a couple. He wasn’t sure if Lute was gay, though. The straight muses outnumbered the gay ones, and Sawyer was fairly sure he knew who all of them were. But maybe he was wrong. Or maybe Lute was a late bloomer.

He almost turned around and walked right out again. The last thing he wanted was to be confronted with Lute while he was thinking about all this crap.

But Lute waved at him. “Hey. Sawyer, right?”

Lute beckoned. “Sit down with us. I mean, if you’re not in a rush.”

Sawyer hesitated. There was no reason on earth to sit down with Lute and Rufus. None at all.

But he found himself traipsing over and sitting down. The table was round, and he could see both of their faces.

“Actually, I was just leaving,”said Rufus.

“Yeah, I know,”said Lute. “You’ve got stuff to do. But I want another cookie, and I want company, so maybe Sawyer will hang with me.”

Sawyer looked away. He hadn’t spoken to Rufus since the other guy had given him crap for dating Nora.

Rufus got up from the table. He pushed his chair in. He gripped it and took a deep breath. “Hey, Sawyer, you know, about last year…”

Sawyer looked at him expectantly.

“Sorry about that,”said Rufus. “You know, it wasn’t really about you, it was just about how stupid all those rules were that Agler was making.”

“Right,”said Sawyer. Agler had been jealous of Nora and Sawyer and tried to keep the two of them from being together. “Don’t worry about it. It’s okay.”

Rufus took a deep breath. “Well. Anyway. I just wanted you to know that I was sorry.”

Rufus turned back to Lute. “You sure you don’t want to come along?”

Lute shook his head. “Nah. Thanks for inviting me, though. Have fun.”

Rufus backed away from the table. He turned and started to walk towards the door. Then he stopped and looked back. “You really don’t want to come?”

Rufus’s shoulders slumped. He turned and slouched out of the dining room.

Lute rubbed his chin. He had a fine, golden stubble. His hair was blond, but it wasn’t as light and silky as Sawyer’s. Lute had honey-colored curls. His eyes were blue. He grinned at Sawyer. “You want a cookie?”

Lute was already getting up. “You should have one. They’re amazing. Macadamia nut and butterscotch chips. I never tasted anything like it.”

“Okay.”Sawyer looked down at the table. What the heck was he doing here? And what was he going to tell Nora when she asked where he’d been? Should he lie? He couldn’t very well tell her that he’d eaten cookies with the most beautiful boy in the whole of Helicon, could he?

Lute returned with a plate full of cookies. “I’m going to want more than one. You will too. You’ll see.”He set the cookies down. “Man, Rufus won’t leave me alone.”

“Yeah?”said Sawyer. “I thought maybe you guys were, you know… like a couple or something.”

Lute threw back his head and laughed.

“Is that funny?”Sawyer swallowed. “Oh, I guess you aren’t gay. I shouldn’t have–”

“No, it’s not that.”Lute was still laughing. “I mean, I’m not gay. I mean, well, I don’t know. I don’t think I am.”He waved that away. “But no, it’s funny because even if I was gay, I would never go for someone like Rufus. And I have made that abundantly plain to him, and he won’t accept it.”

“Oh,”said Sawyer. “Well, maybe he’s just not picking up on your signals.”

“Maybe he’s just hanging out with you to be friendly?”

“Do you even like Rufus? I mean, don’t you think he’s kind of a dick?”

Sawyer considered. The guy had been rude to him last year. But he’d apologized… He shrugged. “I guess I don’t really know him.”

“He’s just got his own ideas about things, you know? And he doesn’t want to budge or see anyone else’s point of view. It’s his way or no way. He rubs me the wrong way.”Lute popped a piece of cookie in his mouth and chewed.

“Yeah, I guess I can see how that would be annoying.”

Lute swallowed the cookie. “Well, I don’t want to be rude to the guy. And he can be okay in small doses. It’s not like I never want to talk to him ever again. I just wish he would stop following me around.”He broke off another piece of cookie. “So, uh, thanks for rescuing me. Rufus was trying to get me to go to some meeting of all the gay muses in Helicon.”

Lute shrugged. “Apparently. And, like I said, I’m not gay, but Rufus seems to think… Anyway, there’s no way he would have let me stay here by myself. You were a perfect buffer.”

Sawyer picked one up, feeling sheepish. He had just noticed that Lute had perfectly straight, perfectly shaped, perfectly white teeth. The boy was like a golden god or something. It was ridiculous how attractive he was. It should be illegal for guys to look like that. It really should. He bit into the cookie.

Lute raised his eyebrows. “So?”

Sawyer swallowed. “Oh. Yeah. Good.”The cookie was pretty tasty, he guessed. But he was on sensory overload from looking at Lute. He could hardly even register the taste.

“Actually, what are you even doing in here? Usually, you’ve got like an entourage.”

“Yeah, the redhead. Your girl? And that other girl, the brunette? And sometimes that Jack guy, that Agler guy. Your entourage.”

“Right.”Lute leaned across the table as if they were sharing a secret. His blue eyes twinkled. “So where are they? How come you’re not with them?”

Sawyer was finding it hard to breathe. He stuffed more of the cookie into his mouth.

Lute watched him chew, waiting as if he was enthralled by whatever Sawyer did.

Sawyer coughed. Cookie particles sprayed all over his shirt. Mortified, he brushed them away.

Sawyer swallowed. “They’re, um, probably sitting around the fire in the tweens and rebels enclave, drinking or playing music or something.”

“But you’re not.”Lute arched an eyebrow, and there was something almost suggestive about it.

Sawyer looked away. He had to be imagining things. Hadn’t this guy just told him that he wasn’t gay?

“I have you all to myself.”

Sawyer didn’t know how to respond. He could feel himself start to sweat in all his crevices. He felt uncomfortable, but at the same time, he didn’t want to be anywhere except right where he was.

“I’m not that interesting.”

“You are, though.”Lute slid back in his chair, looking comfortable and delicious.

Sawyer started to break what was left of his cookie into tiny little pieces.

“You’re different than any of them.”His gaze flicked over Sawyer, from the top of his head and down his torso.

Sawyer drew in a shaky breath.

“Look,”said Sawyer, his voice coming out in a harsh whisper, “I have a girlfriend.”

Lute laughed again, but he locked eyes with Sawyer. “Yeah. I know that.”

Sawyer felt adrift in the blueness of Lute’s irises. “You said that you weren’t gay.”

They sat that way for a long time, each looking into the other’s eyes. Sawyer didn’t think he’d ever stared this long at someone without looking away, not even with Nora. It felt… intimate on a level that he could hardly explain. He felt connected to Lute, as if they were forging a bond.

But then Lute’s gaze flicked away. Casually, as if it was no big deal. Lute ran a hand through his hair. “I just, you know, might be a little, like, uh… curious about… things.”He laughed again. This time the laugh seemed nervous. “Honestly, I don’t know what the hell I’m doing.”

Bullshit, you don’t know, thought Sawyer. His heart was starting to race. He got up from the table. Fast. Maybe too fast, because he knocked over his chair, and it clattered against the floor. He picked it up, feeling clumsy and unsure of himself. “I should go.”

“Right on.”Lute’s smile widened. He looked Sawyer up and down again, this time taking in his whole body, since Sawyer was standing.

He turned to look at Lute. “Yeah?”

“You’re going to be at the Winter Ball, right?”

“Of course.”Everyone went to the ball, didn’t they?

Lute ran his thumb over his bottom lip. “Cool.”

Thoroughly unnerved, Sawyer hurried out of the dining room. 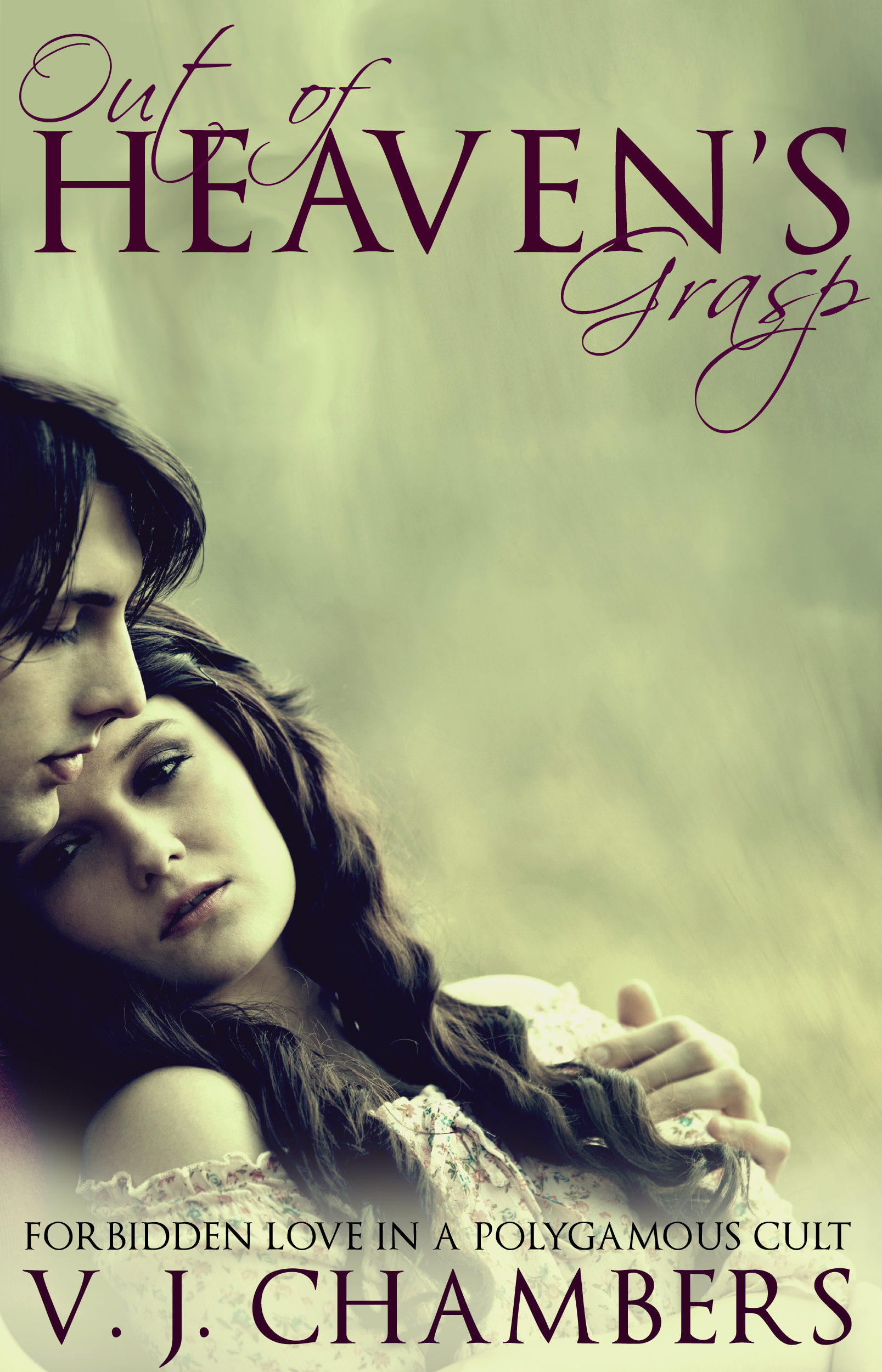 Cover Reveal: Out of Heaven’s Grasp

“Do you think about me, Dana?” 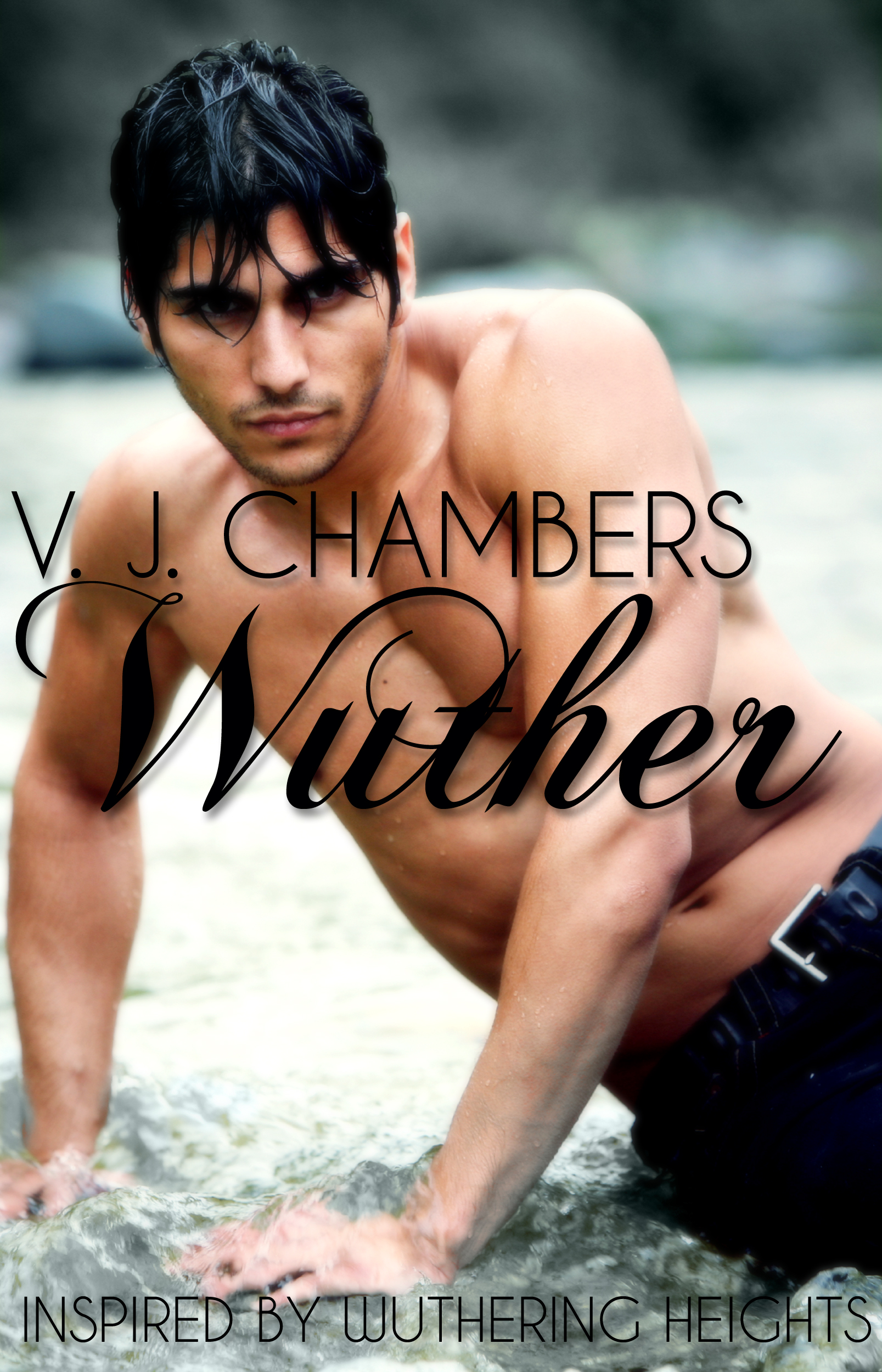 A contemporary retelling of Wuthering Heights… a bonus book.