But Lute had changed.

For one thing, he was taller than Sawyer remembered. For another, heâ€™d cut his hair, and now it hung in ringlets around his face. His shoulders had gotten a lot broader, and he seemed to have muscles everywhere. Sawyer could see that because Lute was only wearing a towel wrapped around his waist. His chest was bare, and Sawyer could see every swell and dip of Luteâ€™s tanned skin. It was warm inside the baths, and Luteâ€™s skin shimmered with a slight sheen of sweat. His muscles glistened. The muscles in his arms, the muscles in his chest, the muscles in his stomachâ€¦

Gods, how could a boy have so many muscles in his stomach like that?

So, I have to admit that when I created Sawyer Snow, I felt a little guilty. I mean, here’s this opportunity for a really interesting gay character and I have him falling for a girl?! Argh. Were the rainbow-colored folks out there going to stone me? So, when that little scene happened in Dancing Days, when Sawyer kissed Nora, I knew right then what I was going to do. They’ll get together, I thought. But that doesn’t mean he’ll never fall for a guy.

Unlike a lot of other series that I’ve written, I’ve got the Helicon books fairly planned out. I know how the series ends, and I know how the make-ups and break-ups work out. Mostly.

Anyway, I know it’s sad to see Nora and Sawyer break up. (Believe me, I do. The scene in the book where it happens made me cry when I wrote it, and I cry every time I reread it, too.) But, remember this is a teen soap, so all the characters are going to break up and make up and sleep together. It’ll be like 90210 by the end of it. Anyway, I’m hoping that you can mourn the loss of Nora and Sawyer and then get on board with Lute Thundercloud.

Man… Lute. Okay, so I imagine him to look something like the guy who originally played Daario on Game of Thrones. With the dimples? 🙂 But with different hair and younger. Don’t know who I’m talking about? Oh, that’s fine. Better just to imagine him for yourself. He’s waaay dreamy, anyway. Just the prettiest boy you can possibly imagine. (Stay tuned for Lute excerpt on Monday.)

Lute’s the newest addition to the gang at Helicon, and I think–if you give him a chance–you’ll fall for him too. 🙂 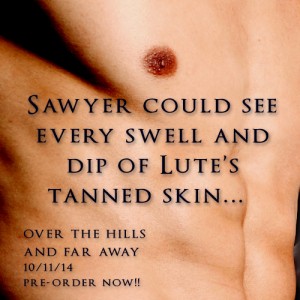 Want to win a copy of my vampire novella Behind Those Eyes?

Grab this button, share it along with this link: http://www.vjchambers.com/?p=1380, come back here and comment, telling me that you’ve done it.

I’ll pick a random commenter and send them an ebook!!

(And if you haven’t pre-ordered Hills, what are you waiting for??)