Ache is an NA romance set in the 1980s that’s all about punk music, and it is awesome.

If I had to complain about anything, it would be two very minor things that aren’t really worth complaining about. One, I wish the book was not double spaced. It means I have to turn the pages on my kindle more often, and that means more movement on my carpal-tunnel-riddled hands, lol. Two, there’s a sort of prologue in the book, but it isn’t really called a prologue, it’s called Chapter One. And there’s notation that says, “Summer 1980.” And then you get to Chapter Two, and it says, “Summer 1982.” Now, this is probably me just being a big idiot, but I sooo did not register the fact that it was two years later. So, I’m reading the book, and I’m like four chapters in, and I’m wondering where in the heck the girl from the first chapter is. I’m like, “Is she ever going to show back up again?” Anyway, at some point, something happened that made me go back and look, and then I realized that two years had passed, and then everything made way more sense. But I feel like if Chapter One was really a prologue or if there was a notation that said, “Two years later…” at the beginning of Chapter Two or something? Because, see I had to do math to figure out that two years had passed, and I am bad at math.

So, Ache is told from the POV of Connor, who is a a guy in a band from the wrong side of the tracks. Connor is real. He’s not a cardboard cut-out fake romantic lead. You know the guy I’m talking about. The one that is all muscles and dimples and smirks, who then says sexy, self-assured things before melting into a puddle of chocolate sometime in Act Three. Instead of feeling like you’re reading a book about someone’s pretend fairy-tale man (who could never exist in the real world) Connor reads like an actual person. Does he have some typical “romance lead” traits? Yeah. He gets in fights to defend girls’ honor. He definitely has a painful past, full of awful secrets. He’s, you know, damaged. But he’s deeply vulnerable, and it’s impossible not to feel his anguish and to ache for him. Plus, the first line of the book is: “I’m shit-faced and pissed.” How can you not love that?

There’s a sort of love triangle in the book, and it’s really fun to read a book with a love triangle with two girls. Probably because it’s way easier to see who Connor should be with than it is to be sure who girl characters should pick. Or maybe it’s just me. Maybe I just identified with one of the girls, and so I thought it was obvious that was who Connor should pick. And he did. (Although there’s definitely room for a sequel at the end, and one is planned.) That aspect of the book really reminded me of Pretty in Pink, only with a male Molly Ringwald who gets into fights and plays in a punk band.

The 80s stuff is really fun, especially the detailed descriptions of everyone’s outfits, which really allowed me to picture all the characters. Generally, I get bored with clothing descriptions, but in this case, it really set the mood and helped to keep me wired in to the decade and the setting.

I’m going on about how fun it is, but I should mention that this book has some pretty dark plot points. A lot of the characters have been deeply hurt in their pasts, both physically and emotionally, and there’s a good bit of fallout from that. But… well, I think I’d say it’s more heavy than dark. This isn’t a book with a questionable moral center–with characters that are less than noble that you can’t decide to root for or not. This is a book about characters who will do what they have to in order to survive.

Finally, there are some really beautiful passages towards the end about how experiencing art (music in this case) or making art are really integral to being human. I felt some of that took my own deeply held, but never quite articulated, thoughts and gave them shape and form–just the way the lyrics of a good rock song does.

I highly recommend you pick up a copy of Ache. I loved it. I loved Connor. And I think you will too. 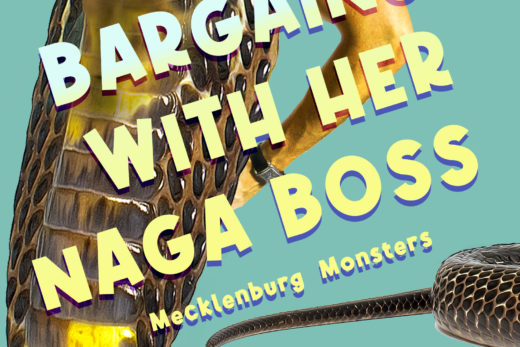 Bargains with her Naga Boss