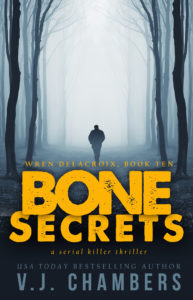 Hawk Marner has been murdered.

Wren Delacroix and Caius Reilly would be celebrating if it weren’t for the fact that they’re the main suspects for the crime.

They weren’t together that night.

Though both of them maintain their innocence, neither of them quite believes the other. It’s not as if they haven’t talked about killing him before. It’s not as if Hawk didn’t deserve it.

But with the due date for the birth of their new daughter looming, they decide to give each other the benefit of the doubt and look for other suspects. Unofficially, of course. Their connections to Hawk mean they’re not allowed to investigate the case in any official capacity.

It feels good to have a case again.

But their lack of trust for each other erodes everything they are.

And with the baby coming soon, they need to rely on each other now more than ever.