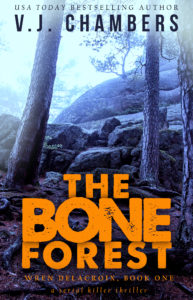 Can an FBI Academy dropout catch a vicious serial killer?

Itâ€™s been fifteen years since Vivian Delacroix unleashed her followers on the town of Cardinal Falls. The cult members killed anyone Vivian told them was a threat to their beliefs.

Now, another killer takes young girls of nine or ten, all related to Vivianâ€™s original victims. He drugs them, suffocates them, and painstakingly arranges them in ritualistic poses. The bodies give up no evidence to the killerâ€™s identity.

When Wren Delacroix finds the latest victim in the middle of giving a tour, sheâ€™s forced to admit to herself that she came back to her home town because of her perverse interest in the case. These dead girls, she canâ€™t get them out of her head. Even though she dropped out of the FBI Academy and tried to flee from the dark parts of herself, she canâ€™t run away.

Before she knows what sheâ€™s doing, sheâ€™s spouting her fully formed profile of the killer to Detective Caius Reilly, head of the tri-state task force, and sheâ€™s begging him to let her help.

She needs to solve this case and stop this killer.

If only to prove to herself that sheâ€™s nothing like her mother Vivian.