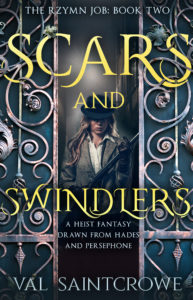 Trapped in the criminal underworld by the possibility of her husband’s seed having taken root in her womb, Sefoni Rience contemplates her options. She has never felt more alive than she does here with Haid and his crew, and the job is Rzymn is not complete, of course. She can think of worse things than this marriage being real, much worse things than being tied to Haid Vortinen, thief and disgraced nobleman, forever.

When she isn’t pregnant, she finds herself disappointed.

So, she hides it.

After all, this man deceived her, didn’t he? It’s not because of honor that she’s now by his side and in his bed. If she also tricks him, they are even.

Meanwhile, the team works to put the pieces into play to complete the job in Rzymn. Cadon and Pairce struggle to trust each other, even as they can only see each other in the dark. Tristanne and Mairli continue in lustful hatred.

Every day brings them closer to the perfect heist.

Every day is a day closer to the day when she must reveal her secret.