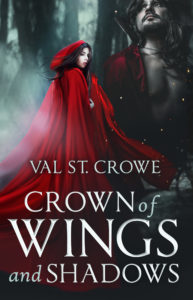 A flush traveled down her body, lighting up burning lines of pleasant tingling from his touch to the very center of her. Her knees felt loose. “Don’t,” she said. “I hate you.”

“I don’t care,” he said, and tilted her head back, giving himself access to her lips. His mouth covered hers.

The dragon prince Kane and his monstrous father the king tyrannize the kingdom. Kane has only one weakness. He is obsessed with Galalie Brache, the only other dragon shifter in the land.

Galalie plans to use this weakness against the prince. She will entice and beguile him, use his desire to capture him and bring about his defeat.

But she must guard herself carefully. Because no matter how she tries to fight it, she cannot deny that the prince stirs tumultuous things within her as well.

If you like gothic and tortured heroes, enemies-to-lovers stories, fated mates, or the Kylo Ren and Rey arc of The Last Jedi, this steamy fantasy romance is for you.

Welp, here it is! It’s Crown of Wings and Shadows, the dragon shifter prequel. Couple things to note about this book:

1) My typical Val St. Crowe rule for this universe is that sex scenes are on screen but no naming of body parts. Uh, not so much here. I would call this explicit.

2) If you’re a fan from way back of my early romance stuff under V. J. Chambers, this is completely in the mold of Jason and Azazel or Cole and Dana, so if you liked that kind of super dark love interest, you will like this.

3) It’s not a one-to-one thing like you could figure with Fifty Shades and Twilight, but some characters are inspired by the new Star Wars flicks. I’d say the strongest in the Kane-Kylo Ren association. I pictured Adam Driver saying every line of dialogue when I was writing it. I would say that Galalie-Rey is less there, though. I also admit that I have a Poe-Leia ship going on (I mean, come on, does it not make everything make sense? Like why he’s all lippy with her? Because they are boning. And then, when he touches her hand when she’s passed out? I’m just saying.) So, I’ve got some characters in there that are analogous, Sir Colt Ralaigh and Queen Zorah, but they’re not as one-to-one either. If you’ve never watched a Star Wars movie and never will, fear not. It’s only there if you want to look for it.