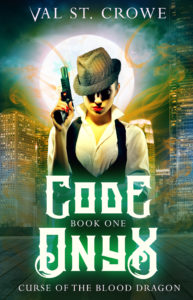 He’s a job. She’s not supposed to fall for him.

Nothing like the grip of a warm gun and strong drink for Jesse Talon. If she’s got that, she can get through anything.

Conscripted to work for the mysterious Section X when she was a teenager, Jesse’s learned the hard way not to ask questions. She just follows orders like a good little secret agent. She’s tough because she doesn’t have a choice.

So, when she’s told to secure Wyatt Flint by whatever means necessary, even pretending to have feelings for him, she doesn’t ask who he is or what he’s capable of. Section X needs Flint for something, and Jesse’s got a job to do.

Too bad he doesn’t want to cooperate. And too bad she’s starting to feel confused about these feelings she’s “pretending” to have. It’s only that when he calls down dragons or breathes cherry red fire or fixes her with his hauntingly blue eyes, it makes her breath catch in her throat.