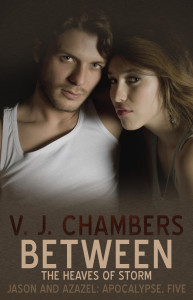 Between the Heaves of Storm
Jason and Azazel: Apocalypse

Azazel arrives at Jason’s community calling herself Joan, with no memory of who she is or what they’ve shared together. But Jason recognizes her, and once he realizes his powers of persuasion work on her now, he’s willing to do anything to keep her with him, no matter how macabre or immoral.

Kieran wanted to use the grimoire to purge Azazel’s powers, but instead he’s transferred them to himself, along with her memories. When he discovers the Order of the Fly wants to use him to control the world, he sets off to find Azazel, determined to return her powers and memory so that she can stop the OF’s attempt at world domination.

ACKNOWLEDGEMENTS
I am indebted to my wonderful beta readers for helping me whip this book into shape. Thank you so much Melinda Desy and Stacey Wallace Benefiel.
Read Online! >>

Between the Covers of… Between

An addendum to the Weekly Round Up 10/19

blogging breathless jason and azazel the stillness in the air trembling

I need your advice