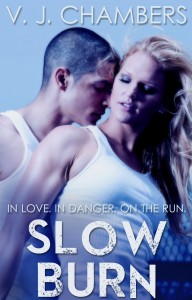 There was a strong arm tight around my waist and something sharp at the back of my neck. “We’ve got your father. Make one bit of noise, and he’s dead.”

I sucked in breath. I twisted to look at the guy who’d grabbed me. He was wearing a black suit, complete with a black tie. He wore sunglasses. His hair was cut in a military-style buzz cut. He was blank and expressionless. “Are you from Dewhurst-McFarland?” I said.

“Shut your mouth,” he said. “We’re going to walk slowly and casually to the parking lot. You’re going to cooperate if you want your father to live. Nod if you understand.”

What was I supposed to do? I nodded.

There was a sharp poke at the back of my neck, and I moved my legs. I realized I was shaking. Was this guy serious? Had they captured my father? My dad always said that if they found either of us, they would kill us. Could I really believe it when this man said my father was alive?

Even if he was, did it matter? I was almost sure that they would kill him anyway, no matter what I did.

Maybe I should scream my head off.

But what if he was telling the truth? What if I screamed, and they killed him? I’d be responsible for killing my father. He’d never been the best dad on earth, but that didn’t mean I didn’t care about him. I didn’t want him dead.

I took one shaky step after another, trying to decide what to do.

“That’s right,” said the guy. His breath tickled my ear. “Nice and easy.”

There was nothing nice or easy about this. I didn’t want to do what he said. For all I knew, he was taking me someplace private so that he could kill me and dump the body. Whatever he was going to do with me, it wouldn’t be good.

My father had risked his life to save me. He’d gone up against a powerful corporation. He’d gone on the run. He’d given up everything. I suddenly was certain that he wouldn’t want me to give in easily. He’d want me to fight.

I took a deep breath. “Help! Help me! Someone help me!”

The man’s hand went to my throat, cutting off my air, choking off my words. “Fuck,” he said. “You couldn’t keep your mouth shut, could you?” He looked around at the parking lot.

There were only a couple people there. A man and a woman. They’d both stopped moving and were looking at us with terror on their faces.

They weren’t going to be any help.

And the man was strangling me.

Of course, I’d be okay, even if he did. The serum that my father gave me made me next to invincible. I healed pretty fast. If I suffocated, I’d be okay. There were very few ways to kill me.

I flailed at the man, driving my fist into his midsection.

He was solid, like the trunk of a tree. He didn’t even react. Actually, it kind of hurt my hand.

He laughed. “You made things messier, but that’s all.” He released my throat, grabbed me around the waist, and threw me over his shoulder. People did not pick me up very often. I wasn’t fat or anything, but I was fairly tall for a girl—about five feet nine inches. Being slung over a man’s shoulder like a sack of potatoes was disconcerting.

I shrieked, beating ineffectual fists against his back. The world was upside down now, and blood was rushing to my head.

The man hurried across the parking lot, one arm holding me tightly against him.

He was still laughing.

Until he stopped. Cut off in mid-chuckle, the man suddenly stopped everything. He didn’t take another step. His grip on me loosened. He seemed to be losing his balance.

A blur of denim and muscles flashed in front of my vision.

In two seconds, I was standing upright, and the man who’d been holding me had crumpled to the ground. His suit jacket fell open, and I saw a gun on a shoulder holster.

Another guy was kneeling over him. He had a similar buzz cut—his dark hair was barely visible against his bare skull. He was wearing jeans and a white t-shirt. It clung to the muscles in his back and shoulders. Jesus, he must work out a lot.

Muscles turned to me. He had piercing gray eyes, a straight nose, a firm jaw. He was probably the most beautiful man I’d ever seen apart from magazine models. “You okay, blondie?”

Muscles took Suit’s gun and tucked it under his jeans at the small of his back. “He didn’t hurt you, did he?”

Muscles felt along Suit’s body, pulling out other weapons. Two more guns. A knife. “As long as you’re safe, doll.”

He grinned at me. “You might want to look away for this part.”

“What?” I was realizing that he had some kind of urban accent.

Muscles turned Suit over onto his back. Muscles used the knife he’d taken away from Suit to slash the back of Suit’s neck. There was blood.

I did look away. What the hell was going on?

Muscles stood up. Whoa. He was tall. Probably six four at least. “All right, let’s get out of here.”

“Saved me?” I hugged myself. Okay, so maybe that was technically true. But he also had just really, really killed this guy right in front of me, and he was being overly familiar, and… “Who says I needed saving?”