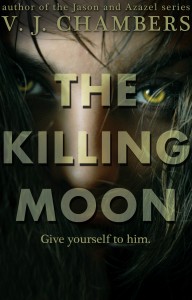 Okay, everyone, this is dark, edgy, creepy, and sexy. I’m hard at work on getting it ready for sale.

The Killing Moon
Give yourself to him.

At work, she struggles with a bewildering case in which rehabilitated werewolves are going astray and killing again. From his maximum security cell, Cole claims he has all the answers. But he’ll only talk to Dana.

Maybe Cole knows something. Maybe he doesn’t. Dana doesn’t know. She only knows she’s grateful for the excuse to go to him. And once she hears his velvet voice again, she’ll do anything to see him, whether it helps solve the case or not.

I don’t have a set release for this yet, but it will probably be ready by mid-February.