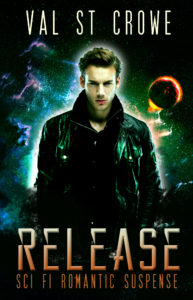 So…Release has been, er, released.

After seven years searching the galaxy, Keirth Transman has caught up to the Duke of Risciter, the man who raped and murdered his mother. Nothing’s stopping his revenge, so when the duke’s fiancÃ©, Miss Ariana Gilit, allows the duke to escape, he’s got no choice but take her ship and blast off in hot pursuitâ€”even if she’s still on board.

Wanting rid of the prissy noblewoman, Keirth plans to dump her at the first port he can. Then he can focus his attention on whatâ€™s important. Killing the duke. But things get complicated when Keith realizes that the duke has focused his malevolent interest on Ariana. She is in mortal danger.

Keirthâ€™s no angel, but he’s not a man who’ll let an innocent woman be terrorized. He’ll do whatever he can to keep Ariana safe from the duke. No matter how annoying she is.