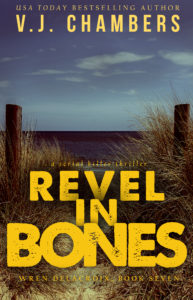 Upon meeting Phineas Slater, Wren Delacroix can’t shake the feeling that there’s something off about him.

The Cape Christopher homicide detective is an effusive fan of Wren’s and Reilly’s, and he tells them how excited he is to have them there in Virginia to help with the serial killer case which grips the sleepy coastal town. He’s charismatic and friendly. He’s eager to turn over all the information he has about the killer, who’s killing women, violating their bodies, and burying them along the highway.

And yet, something about Slater isn’t right. Wren is convinced that he is, in fact, the killer they seek.

But there is no evidence tying Slater to the murders, and he’s quite well-liked at the police department. It’s clear that he’s brought them there as part of some sort of twisted game, flaunting his crimes, flirting with capture, leaving bodies in his wake. All the while, they scramble to find some way to arrest him.

They’ve never faced a killer so dangerously fascinated with them both. When they finally find the evidence they need, he’s waiting. Captured by this madman, now they will fight for their own lives.