Vigil is now for sale!! 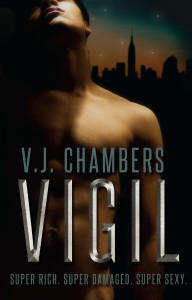 As Vigil, he is dark, sensuous, and irresistible. His touch skyrockets her to heights of pleasure. As Callum Rutherford, he is a billionaire playboy—arrogant, cold, and untouchable. She looks good on his arm, but without his mask, he holds her at arm’s length.

Sex with a masked man. Dinner with a rich sophisticate. A fractured relationship with a complicated man.

Deep down, he is broken, twisted in some dark, hidden way. Some way he won’t reveal to her. She only knows that it is somehow connected to his obsession with The Phantom, the costumed villain whose murder spree has rocked the city.

She must unravel Vigil’s secrets. To make him whole. And to stop The Phantom.