The Pang and the Power, The Nightmare Court, Book Three 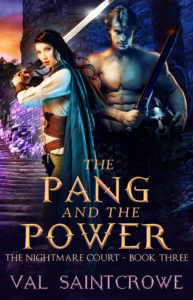 The goddess of nightmares is dead, but Nicce and Eithan now face the threat of Sullo, the sun god and Nicce’s father. Arrogant and vain, Sullo thinks of his children as possessions, extensions of himself. And no daughter of his should be dallying with an abomination like Eithan.

Sullo wants Eithan dead and Nicce to do exactly as he says.

Ciaska’s body isn’t even cold and they’re already back exactly where they started. They are scraping and bowing and placating an insane, powerful, immortal being.

Nicce isn’t about to stand for that. They’ve killed one god, they can kill another.

Sun and bones, why stop there?

Why not kill all of the gods? Every. Single. One.