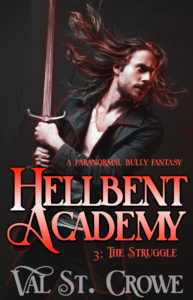 I hate it, but it’s mesmerizing. It makes me feel the most powerful I’ve ever felt, like a dark goddess, and I can’t seem to fight it. It’s all I think about. It’s all I want.

And that’s not good, because I need to be focusing on the conflict between the demonborn and occultists. Since Phist killed the potentate, we’re basically at war now. Everything’s in jeopardy, especially if anyone discovers that we’re on the side of Resistance.

When my obsession with black magic goes too far, the worst thing happens.

Now, I can only focus on one thing. I have to save him.