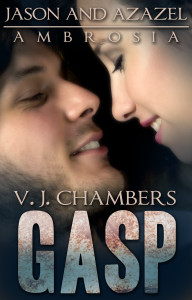 So, the new J&A book is now entitled Gasp, and here’s the text trailer for it. Your first look at the new book!

There are two covers, one with the new couple and one with the old model. I’m uploading the couple on Amazon, and the girl everywhere else including for print.

Hope you enjoy the text trailer…

THIS NOVEMBER
AZAZEL IS PREGNANT

Azazel: Look, it doesn’t matter, anyway, because this baby isn’t our baby. To be more accurate, it’s not… yours.

Jason: What do you mean “˜hurt’ her? How exactly did this thing between you two go down? What’d you do to her?

Jude: You want me to paint you a picture? That it? You want to hear how I bent her over the couch or all the places she put her mouth?

AND JASON’S TAKING IT HARD

Jason: You lied to me.

Azazel: To protect you.

Jason: It’s a big fucking lie, Azazel. You kept this huge thing from me.

Azazel: Well, you didn’t need to know. It’s tearing you apart, and I wanted to save you the pain of–

Jason: You don’t get it at all. I can’t trust you.

BUT OTHER THREATS ARE BREWING

Boone: Imri. He’s spying on us.

Jason: Yeah, what else is new?

AND THIS BABY IS NOT EXACTLY NORMAL

Azazel: There’s something wrong with it, isn’t there?

Azazel: It’s an evil baby, isn’t it? Can you test for evil?

JASON’S INNER DEMONS ARE HARD FOR HIM TO CONTROL

Azazel: You think it’s him, don’t you? You think Jason’s got something to do with those missing girls.

BUT WHEN THE UNBORN BABY IS IN DANGER, JASON AND AZAZEL WILL RALLY TO PROTECT HIM

Azazel: Are you threatening my baby?

Imri: I don’t make threats. I’m telling you what has to happen. That thing inside you needs to die.

NO MATTER THE PAIN

Azazel: Jason, I know what you are. I’ve always known.

NO MATTER THE SACRIFICE

Jason: Look, it’s not perfect, but what is? You’re having a baby. And however that baby happened, you and I are going to love that baby.

Azazel: Do you mean that?

NO MATTER HOW LONG IT TAKES

Jason: Me, Azazel, Chance, and the baby, we’ll go on the run. Azazel and me–we’ve been on the run for most of our lives. It’ll be like going home.

Azazel: While your father and I are gone, you do not see this girl or any other girls from school. We clear?

THEIR CHILDREN WILL BE AFFECTED

Paige: Why is this so hard?

Paige: I don’t know what it is about you, Hunter, but I feel so drawn to you.

Paige: Should you, um, call your parents?

Marlena: The way I see it, these powers seem to come in twos. Couples. Jason and Azazel. Kieran and Eve. So, it seems to me, if you and little Paige here are dreaming about each other, it’s probably because she’s got the other half of the powers.

And, if you want my advice, I think it would probably be best if the two of you stayed away from each other.

Because honestly, no people with those powers have ever done a damned good thing when they were walking around and talking.