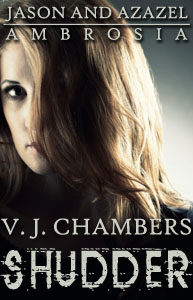 Coming in December, a new Jason and Azazel book, Shudder.

Jason and Azazel wake abruptly from their coma, their powers gone. But they are healing quickly, to the confusion of everyone in the hospital. A team of specialists comes in the middle of the night to whisk them away. When Jason and Azazel offer resistance, they are sedated.

They awake in a strange, institutional place that seems to have no exit. They are prisoners there, being filmed by an unseen presence. Others are trapped with them as well. Some have been there for years. No one knows how to get out.

Jason and Azazel may not have the ability to control minds anymore, but they’re still a force to be reckoned with. And if anyone can find a way out of this bewildering prison, it’s them.

That’s the big news. There will be at least one other book besides this one about Jason and Azazel, because I know I have another story for them. There could be even more, but we’ll see what happens. I promise that Jason and Azazel will never break up again, that there will be no more trips to spirit worlds, and that I won’t let their magical powers get completely out of control and ginormous. Ever again.

You can stop reading now, if you’re just here for the news. The rest of the blog will be a detailed exploration of my neuroses, including why I wrote this book in the first place.

If you’ve been following my blog, you may have noticed that an air of desperation started filtering through sometime in the middle of the fall. I made polls, and tried to write books by committee, and generally was floundering. In September, I wrote the last Toil and Trouble book, which is arguably the most depressing book I’ve ever written. I was in a kind of free fall, and I lived in a bubble of anxiety and terror, pretty much all the time.

I hit a breaking point sometime around the end of October. I had three books that I was planning on writing at once, and one by one, they all started crumbling out from beneath me. Mostly, this was because I wasn’t writing anything I actually wanted to write, but trying desperately to find some kind of magic bullet to save my writing career. Sure, my sales were down (actually, they’re still down), but I had gone off the deep end. I felt like a failure, and I was crippled by the uncertainty of how long I’d continue to be able to support my writing. I thought that the only way to try to find certainty was to write, and to write a lot.

But I was beginning to realize that I couldn’t write only because I wanted to save my career. The pages that I was getting were uninspired and flat. What was worse, I wasn’t enjoying writing anymore. It had become worse than a chore, it had become an obsessive ritual, something I had to do in order to feel okay about myself. And the worst thing was, it wasn’t working anymore. I could write 6,000 words a day and I still felt like a failure. I was trapped there, in terror, and I couldn’t see a way out.

I managed to realize that I needed to write about something I wanted to write about, so I dusted off a few ideas that I’d had (some of which were represented on the poll I put up a few months ago) and asked Jason and Azazel if they’d fit with them. I felt like I needed a book that would definitely sell, and I knew that people routinely asked for more of the two of them. Before, I’d been too proud, too worried that continuing the series would dilute it worse than it had been (reception of That Last Onset had been a little on the tepid side. I felt like maybe I’d betrayed my readers already, and that perhaps they’d abandoned me.) But there was so much fear and worry in my brain now, I didn’t care. I wanted to fall into a world, to let characters speak to me. I wanted writing to be effortless and fun the way it had been when I wrote Breathless. I begged them to make magic for me.

Almost immediately, the writing got easier, and I banged away at this new book without anxiety getting in my way. But the rest of my life got worse, including my obsession with sales and my worries about money. I spent at least an hour every day going over figures, trying to determine how many months I could live with my money, and when I should look for another job. I was stuck in a loop, and I couldn’t come to any conclusions. But I couldn’t have any peace either, because no matter how often I told myself not to think about it, I couldn’t. I even got to the point where I wouldn’t allow myself to look at my bank balance, my online sales on Amazon, B&N, or Smashwords, or to check out my numerous Excel spreadsheets. This didn’t help, because now I was forced to make speculations without any numbers, and my head made things out worse than they were.

One day, my boyfriend, who’d just gotten work through a temp agency, called me from work to tell me that he thought that the company wasn’t going to work with the temp agency anymore, and we were going to lose his income.

I had a panic attack.

And in the middle of the panic attack, I got up, went to my computer, and wrote 2,000 words, because I thought that writing would make me feel better.

And as I was doing it, I remembered that in my freshman year of college, I’d been to see a psychologist who’d told me he thought I might have Obsessive-Compulsive Disorder. And as I frantically typed, I thought, “You know, this writing thing is starting to seem like a compulsion.”

I’d rejected the diagnosis years ago because I wasn’t Monk. I didn’t have to touch certain things before leaving the house. I didn’t wash my hands over and over again. I didn’t have any noticeable compulsions, and I thought the idea was ridiculous.

But I started doing research online, and I discovered something called purely obsessional OCD, and it described me to a T.

At first, it was a relief. Suddenly, I understood why I was as anxious as I was. Then, I started getting obsessed over whether or not I actually had OCD. After all, I’d essentially diagnosed myself, and what did I know? So that triggered about a week of needing to google the disorder, reread the symptoms, and reassure myself that I actually had it, until I realized–ironically–that I’d just turned my diagnosis into another obsessional pattern.

Things got better almost immediately after that. I’ve read a lot of self-help books over the years, and I’ve been to therapists. And no one has ever offered me a way to cope with my anxiety that has provided nearly instant relief. I’ve always struggled with the idea that I didn’t have to worry. I could remind myself all I wanted of the things that I had, or of how secure I actually was, and it only caused more worry, more questions. Sure, I’ve got a house now, but what if it gets taken away from me? Sure, my relationship is going okay, but what if we get in a fight tomorrow? Sure, my books are selling well today, but what if they stop?

What OCD treatment offered me was the most freeing and relieving experience I’ve ever had. Don’t fight it. What if this happens? I answer, “Okay, let’s say it does. Let’s say it has. Let’s say it definitely, most certainly will happen.” I answer, “I can handle that.” I answer, “The world is utterly uncertain and full of risk, and I can’t change that, so I’m okay with it.”

And then the book sort of stopped writing itself, and it got a little hard, but it no longer mattered, because it no longer meant anything. I realized that I could write a book, any book, and I would have no way of knowing whether it would sell or not. The future was unwritten. And that trying to write something that would be a slam dunk was literally impossible. There were no rules. No certainty. I could be working at a fast food restaurant in two months. I could suddenly break my leg and spend all my savings, and we wouldn’t be able to make rent. I could write a book that everyone loved, and I could be an insta-millionaire. The possibilities were endless and completely out of my control. And I was–AM–okay with that.