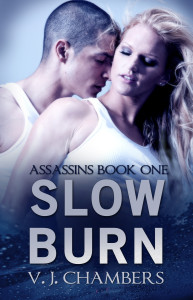 She’s hiding out in a backwoods college because of her fatherâ€™s involvement with a corrupt shadow wing of an arms corporation. The last thing she wants to think about is the fact sheâ€™s in danger. No, instead, sheâ€™d rather make life a non-stop partyâ€”snorting lines and shooting marshmallow-flavored vodka until she canâ€™t remember any of it.

Griffin Fawkes says her father sent him to protect her, but near as she can tell, all heâ€™s doing is raining on her parade. Griffinâ€™s restrained, no-nonsense, and no fun. Gorgeous, sure. Practically lickable. Solid and taut and rippling andâ€¦

But sheâ€™s not going to let that distract her. Of course not.

You will like this book if you liked the following aspects of Jason and Azazel:
-A damaged, secretive bad boy hero with a painful past
-A burgeoning romance while being chased.
-Fast-paced action