So, I released a new book, and I didn’t tell you about it. Sneaky of me, wasn’t it? I was trying an experiment, because I wanted to see what the effect of telling my subscribers and followers about a new release is. Thus far, with no marketing whatsoever, Ratcatcher has sold 2 books in two weeks. Not great. We’ll see if letting you guys know about it enlivens sales. Not sure if it will, though, because it’s a bit of a departure for me.

Ratcatcher is a horror book. I wrote it several years ago, and I’ve been vainly shopping it to agents and editors since then. It’s the last of my backlist books that I can shove out on the world. I decided that releasing it near Halloween would be a good idea, because that’s when everybody’s up for a good scare. Right?

Here’s the blurb:
They are unwanted. Youths that stitch together bits of ragged lace to sell in parking lots and huddle in vans, snorting away the cold in snowy lines. They follow the rock band The Wrenching from show to show.

No one notices when they disappear into the darkness.

No one except The Wrenching’s lead singer, Shane Adams, who just wants his fans to go home. He thinks they’re in danger. “I play,” he says. “They follow. They die.”

This macabre thriller takes its cues from the Pied Piper folk tale, also known as “The Ratcatcher of Hamelin.”

Now…the hard sell. You will like Ratcatcher if you like tortured romance. My two leads are angsty to the extreme. Shane Adams is a coke-snorting rock star who may be going insane. He’s obsessed with trying to get his fans to stop listening to his music, because he thinks it’s killing them. Lark Thomas is a fan of Shane Adams. She’s been abused by men in the past, and is used to sleeping her way to whatever she needs or wants, mostly because she’s simply numb to all of it by now. The two of them fumble around trying to fall in love with each other, because they’re both completely screwed up in the head.

But what makes it different than every other book I’ve ever written? Well, there are some graphic death scenes. Death by nail gun, anyone? (Heh heh heh.) There’s a siege and a bunch of crazed, zombie fans trying to kill people. And there’s a pretty visceral (if I do say so myself) twist ending, which may piss people off. (Kind of along the lines of the ending of Pet Semetary. Well. Sort of.) So, you have been warned. If that sounds like it will make you vomit, run away now. If not, here’s an excerpt from Ratcatcher: (Oh, Shane has pet rats. Also, adult language follows.)

She felt Shane’s arms around her, from behind. She hadn’t heard him approach. He kissed her neck. Lark stiffened, but didn’t stop him. Still. He seemed to feel that her body had gone rigid. His arms fell limply away from her. He stepped back.

“I fed the rats,” said Lark, turning to face him.

“Are you okay?” asked Shane.

“No, nothing’s wrong,” said Lark. “Everything’s fine.” She tried to smile. “I think you might be running out of rat food.”

“I have a standing order with the company. They send more at periodic intervals,” said Shane.

Of course he did. Lark just didn’t want to talk about kissing Shane. She just…

“Did you not like what happened last night?” Shane asked.

Oh God. Lark sighed. She sat down on one of the couches in the bus. On the one hand, she could lie, say she hated it. That might stop anything else from happening, and she’d already decided that would be safer. Easier. But. It was Shane Adams. And she… “Of course I liked it,” said Lark.

She hadn’t meant it like that. “I like you,” she said. “I like the way you talk about your rats. I like how concerned you are about your fans and your band. You’re so kind, Shane. You’re so generous. You’ve been so generous to me…”

“You think I’m just putting you up because I want to get in your pants,” said Shane.

What? “You can have any woman you want on earth. Why would you bother wasting energy on trying to seduce me?”

“So you are trying to seduce me?”

“You think I’m amazing?” Lark could feel her insides melting into each other. She was falling in love with Shane Adams. Dammit.

“Since the moment I met you,” said Shane.

“But you’re not trying to seduce me?”

“Of course I want to be with you.”

“Then what’s the problem?” Shane looked so frustrated.

“What if it doesn’t work out?” asked Lark.

But my title does say books, with an S, doesn’t it? Well… I’ll be releasing the first book in the Toil and Trouble trilogy soon. Here’s what I’ve got to whet your appetite for that. A blurb:

Olivia Calabrese has valued nothing more strongly since her mob boss father was arrested and her mother was killed in the cross fire. Even though her family sells illegal magical charms that have the nasty side effect of turning some wearers into berserkers–rage-filled monsters–she sees betrayal as a far worse offense than harming people. To prove her loyalty, she dreams of succeeding her father as head of the mob family.

When her uncle, the current boss, is shot by a rival gang, she just might get her chance.

But her cousin, her only competition, whispers something to her that throws her off track. He says her mother ratted the family out to the police. He says that her mother’s death wasn’t an accident, but a hit ordered by her father.

Her entire worldview called into question, Olivia sets about hunting down the truth about her parents. And to complicate matters, she seems to be falling for a boy who’s turning into a berserker–from her own family’s charms.

As her set of values shatters around her, Olivia must choose between staying loyal to her family or fighting against them. 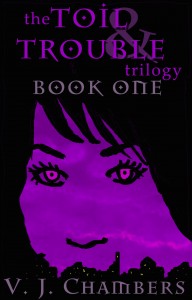 But wait! I’m not done. I also plan on (very, very soon) releasing a series of interconnected short stories about a goddess of Fate who runs a time-traveling bar to fix time paradoxes. But, um, more on that later.