So, back in the day, when I first starting publishing my books online, I used to write text trailers. At first I wrote one for every single chapter of Breathless. Then that got to be too much work, and so I only wrote ones for the whole books. If you’d like to read them, you can find them on my now defunct forum.

These trailers were kind of silly and fun, and they expected you to be able to imagine the announcer voice and the characters saying the dialogue.

Anyway, I remembered them out of the blue, and thought it might be fun to do one again. So here is the super cheesy, super over-the-top trailer for Silas.

It’s your first look at the book. Enjoy. 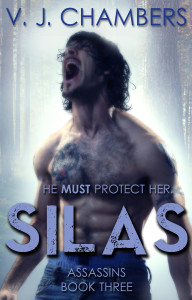 Silas: Look, I got girls leaving my house in tears day in, day out, because they can’t get enough of me.
Christa: That’s nice.
Silas: What? You saying it was bad?
Christa: No. Don’t worry. You were very… energetic.

THE THIRD BOOK IN THE ASSASSINS SERIES
SILAS

ALL SILAS WANTS TO DO IS GO AFTER ROLF, A DANGEROUS MAN FROM HIS PAST

Silas: Derek Rolf is really rich and really twisted. And I came here to kill him.
Griffin: We don’t kill people anymore, Silas.

Griffin: Hopefully this is the right size.
Silas: What’s the right size?
Griffin: The suit
Silas: Suit?
Griffin: For my wedding. You okay, man? You been hitting that home brew of yours so hard that you blacked out the fact I was getting married?

Griffin: You stay the fuck away from her, you hear me?

…AND SILAS ISN’T HAVING THE BEST WEEK EVER.
WHEN ROLF CAPTURES BOTH HIM AND CHRISTA, ROLF’S GOT A VENDETTA TO SETTLE.

Silas: Leave Christa out of this. She’s got nothing to do with this.
Rolf: You don’t know how it feels. But you will. I’ll chase her. And then I’ll catch her. And I’ll have her every way I can think of having her. Every way you had my wife.
Silas: This isn’t the same, Rolf. Christa’s not mine. She’s not anything to me. Just let her go.
Rolf: And then I’ll kill her. And you’ll watch all of it.

SILAS HAS TO DO EVERYTHING IN HIS POWER TO PROTECT CHRISTA.

Silas: These are the shells. You put them in here. Then you pump it. Then you can shoot. You got that?
Christa: I don’t know.

AND FACE HIS OWN FEELINGS FOR HER.

Christa: Oh, I get it. That’s what this is about. You’re getting possessive. You want me to fall madly in love with you. But I haven’t. And that’s driving you crazy.
Silas: That’s not it.

BECAUSE SHE’S DIFFERENT THAN ANY GIRL HE’S EVER MET, AND THEIR EXPERIENCES WILL CHANGE HIM FOREVER.

Silas: I’ve never felt this way about anyone before, and I don’t want you to go away. I want you to be here. I want us to be… together.
Christa: I’m sorry. I like you. I’ll miss you. But I don’t want to be with you.

COMING SOON TO EBOOK AND PAPERBACK
SILAS
BY V. J. CHAMBERS
BE SURE TO SUBSCRIBE TO MY EMAIL LIST TO KNOW THE SECOND IT’S AVAILABLE.